The Eating of the Gods: An Interpretation of Greek Tragedy 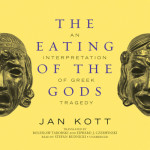 He sights at Greek tragedy…along the smoking chimneys of Auschwitz…No twentieth-century [critic] could come closer to making Sophocles a contemporary.

In 2012, The Guardian’s theatre critic Michael Billington compiled an A to Z of modern drama. And K is for none other than Mr. Jan Kott. Billington states: “I can’t think of anyone today who influences production in quite the same way as Kott.”

Born in Warsaw, Jan Kott (1914-2001) received a law degree from the University of Warsaw in 1936 and fought in the Polish Army during World War II. He was a professor of literature at the University of Warsaw. He was granted asylum in the United States in 1969 and continued teaching at the State University of New York at Stony Brook from 1969 to 1983. In addition to being a professor, he was an author, poet, translator, and theater critic. As an author, he is best known for his book Shakespeare, Our Contemporary, published in English in 1964. His insights influenced Peter Brook’s 1964 production of Shakespeare’s “King Lear,” starring Paul Scofield. Kott also helped shape the work of directors like Giorgio Strehler and Ariane Mnouchkine.

Kott’s classic SHAKESPEARE, OUR CONTEMPORARY was followed by THE EATING OF THE GODS – both narrated by Stefan Rudnicki and now available on audio!

THE EATING OF THE GODS: AN INTERPRETATION OF GREEK TRAGEDY

As in his earlier acclaimed Shakespeare, Our Contemporary, Kott provides startling insights and intuitive leaps which link our world to that of the ancient Greeks. The title refers to the Bacchae of Euripides, that tragedy of lust, revenge, murder, and “the joy of eating raw flesh” which Kott finds paradigmatic in its violence and bloodshed. Whether reflecting on Prometheus or drawing a modern parallel in Beckett’s Happy Days (“the final version of the Prometheus myth”), Kott’s vision is brilliant, his method innovative, and his sensibility consistently new.

Since this book first appeared, Kott’s connections between ancient and modern have become even more compelling in their immediacy. –downpour.com

Take “a fresh look” — oh, make that “a fresh listen” — to the Greek classics and purchase your copy today.