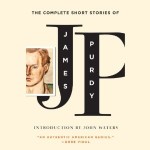 The publication of The Complete Short Stories of James Purdy is a literary event that marks the first time all of James Purdy’s short stories – 56 in number, including seven drawn from his unpublished archives – have been collected in a single volume.

As prolific as he was unclassifiable, James Purdy was considered one of the greatest – and most underappreciated – writers in America in the latter half of the twentieth century. Championed by writers as diverse as Dame Edith Sitwell, Gore Vidal, Paul Bowles, Tennessee Williams, Carl Van Vechten, John Cowper Powys, and Dorothy Parker, Purdy’s vast body of work has heretofore been relegated to the avant-garde fringes of the American literary mainstream.

Love, disillusionment, the collapse of the family, ecstatic longing, sharp inner pain, and shocking eruptions of violence pervade the lives of his characters in stories that anticipate both “David Lynch and Desperate Housewives” (Guardian).

In “Color of Darkness,” for example, a lonely child attempts to swallow his father’s wedding ring; in “Eventide,” the anguish of two sisters over the loss of their sons is deeply felt in the summer heat; and in the gothic horror of “Mr. Evening,” a young man is hypnotized and imprisoned by a predatory old woman. These stories and many others, both haunting and hilarious, form a canvas of deep desperation and immanent sympathy, as Purdy narrates “the inexorable progress toward disaster in such a way that it’s as satisfying and somehow life-affirming as progress toward a happy ending” (Jonathan Franzen).

It may have taken over fifty years, but American culture is finally in sync with James Purdy. As John Waters writes in his introduction, Purdy, far from the fringe, has “been dead center in the black little hearts of provocateur-hungry readers like myself right from the beginning.”