The Age of Napoleon (Story of Civilization, Volume 11) 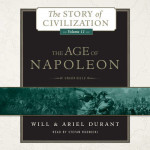 Their gifts are accuracy, clarity, and the organization of a huge amount of material into a lively narrative.

The Age of Napoleon: A History of European Civilization from 1789 to 1815, the eleventh and final volume of the Story of Civilization, surveys the amazing chain of events that wrenched Europe out of the Enlightenment and into the age of democracy. In this masterful work, listeners will encounter

Narrated by Stefan Rudnicki and available now at downpour.com!