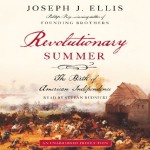 In Revolutionary Summer, the eminent historian Joseph Ellis describes the events surrounding the birth of America during the summer of 1776 (loosely defined as May through October of that year). Ellis's stated aim is to treat the military and political events of the period in tandem, and he skillfully establishes that there were two different sets of goals at stake: George Washington’s Continental Army considered independence an inevitability, while the Continental Congress considered it a last resort. A Pulitzer Prize and National Book Award-winner, Ellis recently retired as the Ford Foundation Professor of History at Mount Holyoke College. Reading Revolutionary Summer is like receiving a distinguished lecture from a man who has dedicated many fruitful decades to breathing life into our understanding of history—he makes Washington, Adams, Jefferson, and others of the era come alive for the reader.