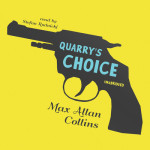 Thanks to Collins, and narrator Stefan Rudnicki, you can’t put your headphones down…Rudnicki’s voice is deep and entrancing…[and] he’s got a fine Southern brogue and moves this hard-core story along at a frenzied clip.

In 1976, THE BROKER by Max Allan Collins was published and the Quarry series was born. Quarry centers on a Marine sniper who, after a stint in Vietnam, finds himself shunned by those he loves and demonized by the public. Combat-hardened and disillusioned, he begins earning a living as a hitman, taking orders from a man called simply The Broker. Four more books would follow, published in the late 70s and 80s, and then there would be a long hiatus. In 2006, after nearly a twenty-year absence, Collins brought Quarry back in THE LAST QUARRY. Followed by THE FIRST QUARRY (2008) and QUARRY IN THE MIDDLE (2009). In 2010, Perfect Crime Books republished the Quarry series (with a few titles changes to boot), while Collins kept the adventures coming with QUARRY’S EX (2011) and THE WRONG QUARRY (2013). And now:

Quarry is a pro in the murder business. When the mysterious man he works for becomes a target himself, Quarry is sent south to remove a traitor in the ranks. But in this wide-open city—with sin everywhere and betrayal around every corner—Quarry must make the most dangerous choice of his deadly career: who to kill?

And if you thought that author Max Allan Collins was resting during the hiatus, well, guess again. Max Allan Collins, known widely for his graphic novel THE ROAD TO PERDITION (which was made into a Academy Award winning movie), has been nominated over  fifteen times for top honors by the Private Eye Writers of America (PWA) and has won twice with his Nate Heller historical mysteries. He received the PWA life achievement award, the Eye, in 2007. Collins is also continuing the series of late legendary mystery writer Mickey Spillane and maintains a regular blog which we love.

Skyboat’s Stefan Rudnicki got into the booth to bring this killer with an attitude to life. Hear for yourself — purchase your copy today.