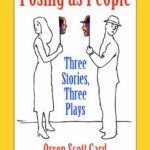 By the marvelous rendering of these stories as plays, their essences have been distilled, concentrated and made more immediate.

As these three Orson Scott Card SF stories and their one-act play adaptations show, a good human drama can happen anywhere in time and space. As they explain in their respective commentaries, Brick, Johnston and Emily Janice Card (Rankin) each had a longstanding fondness for the story he or she adapted.

“Clap Hands and Sing,” about an old man time-traveling to consummate a relationship he never had, is the least moving of the three in both forms, largely because the protagonist is a selfish jerk.

“Lifeloop” poses the question: if your life is a TV show, how will you know if true love comes your way?

“Sepulcher of Songs” follows a young quadruple amputee’s escape from either her body or her mind as aided by a possibly imaginary friend and chronicled by the psychiatrist who comes to love her.

Posing As People includes performances of the plays as well as readings of the original stories.