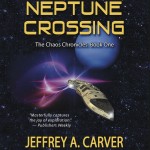 “Jeff Carver is a hard sf writer who gets it right—his science and his people are equally convincing... from a chilling look at alien machine intelligence, to cutting-edge chaos theory, to the pangs of finite humans in the face of the infinite. If you like intriguing ideas delivered in an exciting plot, this is your meat.”

Skyboat Media is proud to present NEPTUNE CROSSING, the first book in The Chaos Chronicles. Nebula-nominated author Jeffrey A. Carver and Grammy-winning narrator Stefan Rudnicki bring you the story of John Bandicut, an astronaut exploring the surface of Neptune’s moon, Triton. After being cut off from his internal link to the “datanet” by faulty technology, Bandicut becomes the reluctant host of an alien mind. This quarx is part of an ancient galactic civilization that manipulates chaos theory to predict catastrophic events. The quarx needs Bandicut to help it save Earth.

Should he trust it?

Listen to the story that Science Fiction Chronicle called “one of the best SF novels of the year.”