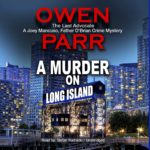 Apart from the wonderful storytelling skills, the author demonstrates great mastery in the art of creating biting suspense, of excellent prose, and the ability to stir strong emotions in readers.

Skyboat Media and Owen Parr are proud to present the second volume in the Joey Mancuso & Father O’Brian Crime Mystery Series:  A MURDER ON LONG ISLAND.

After solving the last case, Joey Mancuso was named “The Last Advocate of the Victims” by the local New York Press.

That’s why Harold Longworth’s attorneys asked to consult with Mancuso and his partner-in-solving-crime, Father Dominic O’Brian.

In A MURDER ON LONG ISLAND, Mancuso and O’Brian have ten days to figure out whether or not Longworth murdered his wife.  This man, a successful real estate developer, is looking at life in prison if he’s found guilty.

Not only is there physical evidence implicating Mr. Longworth in his wife’s death, but he had motive.  He thought she was having an affair and he found out that Mrs. Longworth had wanted to file for divorce.  A divorce that could have cost him at least half of his $75 million fortune.

Will Mancuso and O’Brian be able to find out in time?

If you enjoyed A MURDER ON LONG ISLAND, check out Mancuso and O’Brian’s first case with A MURDER ON WALL STREET.