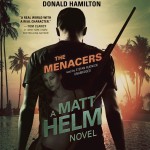 "Hamilton has never been given his due for the psychological tension of his books (masterly, dark, and constantly surprising), nor the wry, rococo language of their telling. He is a pure storyteller of the first rank."

The Menacers is the eleventh installment in Donald Hamilton’s iconic and thrilling Matt Helm series, which has sold more than twenty million copies worldwide.

Matt Helm is puzzled. He’s been sent to Mexico to investigate the sighting of a flying saucer, but Helm doesn’t believe in little green men. Then his Russian opposite number is shot in her hotel, but who did it? And why are the Mexican cops acting so tough? Time to track down the redhead who called in the sighting and get to the bottom of the case. -downpour.com