Exile: The Book of Ever Volume 1 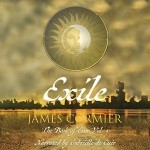 Centuries after the Fall, the United States has been wiped away. The crumbling remains of the great American empire are home now only to savage, lawless tribes and packs of ravening Damned – the twisted children of the apocalypse. Most of those few who survived humanity’s destruction spend their short lives in a violent struggle for survival. But some light still flickers in the darkness: the Blessed of Bountiful live in seclusion, relying on walls both physical and spiritual to protect them from the Desolation that their world has become.

Among them are the Saints, those few men and women born with superhuman abilities that the Blessed see as gifts from God. The violent apostate tribes of the Northeast Kingdom have always been a danger, but up until recently its small size and the vigilance of its people have made Bountiful an unappealing target. As attacks on the community grow harsher and more frequent, however, even the steadfast Blessed are forced to start preparing for the worst.

With her home’s very existence threatened, 17-year-old Ever Oaks, a Saint with the power to heal, is forced to make a difficult choice, one that may come to define her people’s future. –amazon.com