Skybook: Elysium: Or, the World After 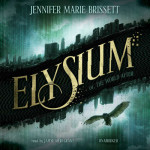 Some of the praise heaped on this book includes the words ‘audacious,’ ‘ambitious,’ and ‘hard to believe this is a first novel.’ These are all entirely apt…Every once in awhile it’s great to see a book with such unconventional structure, that takes the genre playbook, tears all the pages out, and shuffles them back together and still manages to tell both one and many moving and satisfying stories.

A 2014 Locus Recommendation for First Novel

A computer program etched into the atmosphere has a story to tell—the story of two people, of a city lost to chaos, of survival and love. The program’s data, however, has been corrupted. As the novel’s characters struggle to survive the apocalypse, they are sustained and challenged by the demands of love in a shattered world both haunted and dangerous. –downpour.com

Jamye Méri Grant attended the High School for the Performing and Visual Arts in Houston, Texas, where she was a Presidential Scholar and the recipient of the prestigious YoungArts award. She studied theater arts at Pepperdine University and has acted in numerous theater performances, as well as in film and television.