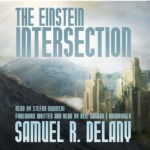 When Delany describes to us what he has seen, what he can compute, adduce, intuit or smell in the underbrush, our reaction is to sit bolt upright and cry out, 'Of course, I have that very wound myself!' The ability to produce this reaction in people is one of the commonly accepted and apparently valid appurtenances of genius...I look forward to the explosion reading this will create within you."

Skyboat Media is proud to add another classic from Samuel R. Delany to its title list:  THE EINSTEIN INTERSECTION.  Narrated by Stefan Rudnicki.  With a foreword written and read by Neil Gaiman.

The Einstein Intersection won the Nebula Award for best science fiction novel of 1967. The surface story tells of the problems a member of an alien race, Lo Lobey, has assimilating the mythology of Earth, where his kind have settled among the leftover artifacts of humanity. The deeper tale concerns, however, the way those who are “different” must deal with the dominant cultural ideology. (Summary courtesy of Amazon).

If you’re interested in more Samuel R. Delany titles on audio, check out these classics from Skyboat Media.