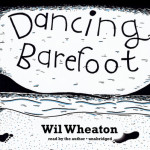 In this short but sweet memoir, Wil Wheaton, best known for his role as Wesley Crusher in Star Trek: The Next Generation, dishes about everything from psycho fans to the joys of being a stepfather with equal parts warmth and humor. The narrative itself is amusing, but hearing him mimicking costars (such as a dead-on impression of Patrick Stewart as Captain Picard saying his famous ‘Make it so’) brings it to a whole new level of hilarity. He also enlivens the wacky world of comic convention attendees with vocal caricatures, performing a variety of accents…An amusing listen for anyone who’s truly a geek at heart.