THE CITY ON THE EDGE OF FOREVER 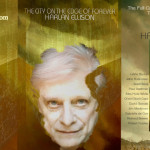 Skyboat Media, with the backing of 391 generous Kickstarter fans and friends has produced a full-cast audiobook version of Harlan Ellison’s Original Star Trek Teleplay THE CITY ON THE EDGE OF FOREVER and the surrounding Controversy. This version includes Harlan’s Essay (narrated by The Man himself)about this most famous of Star Trek episodes, the unaired teleplay, both treatments, the revised Prologue and First Act, and afterwords by colleagues who were there at the time. Almost 8 hours of audiobook gold that should delight fans of Harlan, radio drama, history and a historical celebration of Star Trek’s 50th Anniversary year. The Full Cast listed here. Exclusively available here from Skyboat for a limited time release. Click here to learn more