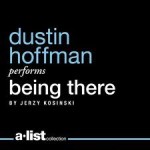 Dustin Hoffman's performance of this spare and provocative novel is a revelation.

Jerzy Kosinski’s clever parable of a naive man thrust into the modern world is more pointed now than ever. Academy Award winner Dustin Hoffman (Rain Man, The Graduate), perhaps best known for his portrayals of vulnerable characters and antiheroes, gives an understated and exemplary performance of this satiric look at the unreality of American media culture.

Chance, the enigmatic gardener, becomes Chauncey Gardiner after getting hit by a limo belonging to a Wall Street tycoon. The whirlwind that follows brings Chance to his new status of political policy advisor and possible vice presidential candidate. His garden-variety political responses, inspired by television, become heralded as visionary, and he is soon a media icon due to his unknown background and vague, yet appealing, conversational nature. Being There was adapted into an Academy Award-winning film, starring Peter Sellers as Chance, in 1979.