THIRTY YEARS OF TREASON – The Complete Set and DVD

THIRTY YEARS OF TREASON: EXCERPTS FROM HEARINGS BEFORE THE HOUSE COMMITTEE ON UN-AMERICAN ACTIVITIES 1938-1968; COMPLETE SET

Eric Bentley is a British-born A 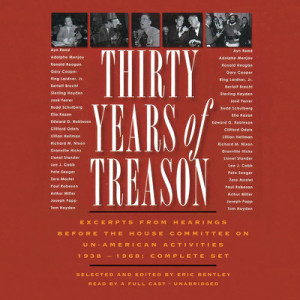 merican critic, playwright, editor, and translator known for being one of the preeminent scholars of Bertolt Brecht. Now in his nineties (check out his 94th Birthday Bash), Bentley lives in New York City and continues to be active in the literary community. He taught for many years at Columbia and Harvard Universities, which is where he first crossed paths with a student named Stefan Rudnicki.

Now, all these years later and with Blackstone Audio‘s generous support, Stefan sought to revisit their connection by producing Bentley’s one-of-a-kind tome.

“We have Bentley to thank for this bittersweet vaudeville show, this congressional cabaret of the absurd, this peptic epic…What he has done is give us HUAC as spectacle, and the perspective is shattering.” —New York Times

We have proven to the world we can make a “quiet” audiobook; well, this is a “noisy” audiobook.  We opened the doors in Skyboat’s Studio A, cranked up several microphones, and went to town. We wanted the actors to be able to play off of each other, and to accomplish this massive work (over 40 hours of dialogue) on our budget, we threw caution to the wind and let the actors tear into this fascinating and chilling text.

The result is three volumes of chilling reenactments and commentary from the Federal government’s anti-Communist investigations. Each available separately and now brought together in one boxed set, complete with a Behind-the-Scenes DVD, including interviews and footage of the in-studio action. 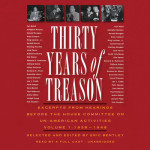 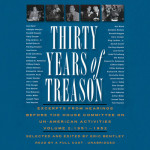 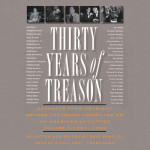 This absorbing collection of significant excerpts from the hearings shows with painful clarity how HUAC grew from a panel that investigated possible subversive activities in a “dignified” manner to a huge, unrelenting accusatory finger from which almost no one was safe.

Thirty Years of Treason serves as a warning for the future and creates living history from the documentary record. We must never forget. We listen and we remember.