SOULBOUND: The Return of the Elves, Book #1 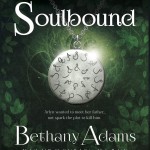 I enjoyed this book from beginning to end and finished it rather quickly. The world Bethany Adams has woven together is amazingly put together and captivating. I did not want to put this book down. I enjoyed reading about Arlyn & her introduction into the elven world. I can't wait until book #2! 5 Stars

Skyboat Media is proud to present SOULBOUND, the first installment in THE RETURN OF THE ELVES SERIES by exciting new fantasy author Bethany Adams.

Arlyn’s quest is simple.  Find her father and tell him her mother is dead.  She promised her mother she would.  Though Arlyn’s father is an elf lord, and doesn’t even live on Earth, finding him turns out to be the easy part.  She manages to make it through the Veil and reach her father.  What she doesn’t realize is that her father’s acknowledgement of her as his half-human heir will reignite the same conspiracy that separated him from her mother in the first place.

“All the power he’d gathered seemed to drain out at once, leaving him hollow.  Kai pulled his essence back and scrambled for something resembling real.  Surely, it wasn’t this.  Finding one whose soul could join with one’s own was rare, and after five hundred years, Kai had long ago given up hope of meeting his soulbonded.  But he knew-knew-it was her.  This stranger.”

Does it work out for Arlyn and Kai?  What happens to Arlyn’s father? Is she accepted by everyone?

Listen and find out.  Purchase your copy of SOULBOUND today!