Evelina: or, The History of a Young Lady’s Entrance into the World 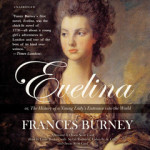 “Fanny Burney’s first novel, Evelina, was the chick-lit novel of 1778—all about a young girl’s adventures in London and one of the best of its kind ever written.”

“It was whose favorite book? Jane Austen? Oh, maybe I should check it out!” We agree!

Originally published in 1778, Evelina is Frances Burney’s first and most beloved novel. It was a landmark in the development of the novel of manners and went on to influence such enduringly popular authors as Jane Austen.

By turns hilarious and grim, witty and lyrical, the story follows young Evelina as she leaves the seclusion of her country home and enters into late eighteenth-century London society.

Orson Scott Card has been a lifelong fan of this book and, luckily for us, his lovely daughter, Emily Rankin, not only grew up with an appreciation for the literature but is also a wildly talented narrator in her own right. She was perfectly poised to bring her own flair to the project. Add a great director like Claire Bloom to the mix and a little help from Skyboat’s Stefan Rudnicki, Gabrielle de Cuir, and Orson Scott Card himself, and you’ve got an audiobook that we hope will be enjoyed through the generations. So pick up your copy today and pass it on!