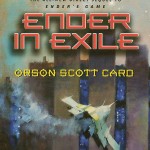 Ender has many accomplishments, in particular, having saved the world as a boy at battle school. Here he emerges from exile and travels with his sister to a colony of which he has been designated the new governor. Stefan Rudnicki is the anchor of this production, which draws on a cast familiar to listeners of the Ender series. Cast members re-create characters and interact with each other smoothly, picking up threads from a number of books in the series. The dialogue moves quickly among them, and the production maintains a strong pace. Card himself presents the afterword, which provides context for the development of this episode and justifies various departures from the suggestions he received for the story.