Bears Discover Fire, and Other Stories 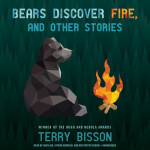 Witty ATM machines, alien invaders of not just another species but another food group, and animals challenging what it means to be “civilized.” Intrigued yet? Each are stories found within Terry Bisson’s collection BEARS DISCOVER FIRE, AND OTHER STORIES.

“Whether narrating a parable of Earth’s dying (“Carl’s Lawn and Garden”), exploring the afterlife (“Necronauts”), or chronicling the relocation of a country (“England Underway”), Bisson continues to surprise his readers with his startling vision and iconoclastic imagination. These 19 stories (most published only in magazines) showcase the varied talents of a skilled and as yet unjaded writer.” –Library Journal

Terry Bisson is an American science fiction and fantasy author of novels and short stories. In fact, his 1990 short story “Bears Discover Fire” won a Hugo and Nebula award, and his all-dialogue story “They’re Made out of Meat” is one of the most widely-reprinted SF stories of the last several decades.

For stories of this caliber, we brought in three outstanding voices: Grammy winner Janis Ian (the witty ATM machine); Broadway and TV actor and director, and Audie-winning narrator, Kristoffer Tabori (the foreign aliens, composed of meat); and Audie winner Stefan Rudnicki (taking on the title story itself). And those are just a few – plenty more to sink your teeth into, as you can see from the full Table of Contents below. Pick up a copy and start listening today!

They’re Made Out of Meat – narrated by Kristoffer Tabori

Next – narrated by Janis Ian

Are There Any Questions? – narrated by Stefan Rudnicki

Two Guys from the Future – narrated by Janis Ian

The Message – narrated by Kristoffer Tabori

By Permit Only – narrated by Janis Ian