The Adventures of Gorlen Vizenfirthe Series by Marc Laidlaw Frey Saga by Melissa Wright: FREY, PIECES OF EIGHT, and RISE OF THE SEVEN

Maracot Deep and The Coming of the Fairies

Skyboat Media is proud to present, with Blackstone Publishing, an original pairing of two unique works by the beloved Sir Arthur Conan Doyle!

The sharp-eyed and logical detective Sherlock Holmes may be what Doyle is best known for, but the author himself had an exceedingly imaginative mind, and was in the later years of his life an avid spiritualist. In this special pairing you will see the vast expanse of his literary and philosophical interests.

“It is only when you touch the higher that you realize how low we may be among the possibilities of creation.”
― Arthur Conan Doyle, The Maracot Deep 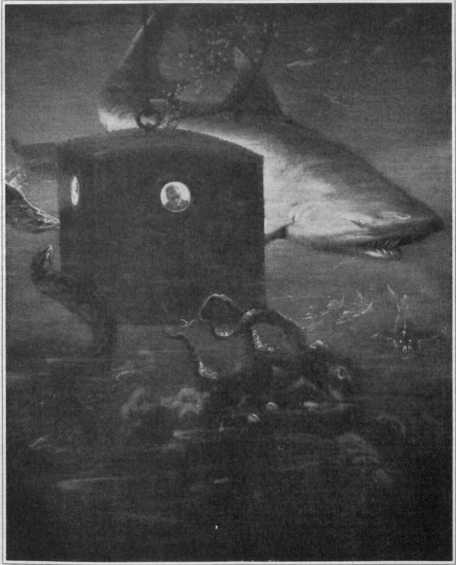 MARACOT DEEP takes us all the way to the bottom of the sea to uncover the mysteries of the unexplored terrain beneath the waves. The story unfolds itself in letters written by a young zoologist, Cyrus Headley, who accompanies Professor Maracot on his wild expedition. These letters that Headley had written to his friend, Sir James Talbot, were miraculously recovered and published after their ship had sunk. The letters themselves detail the plight and adventures of the somewhat mad Professor Maracot and his team of scientists and crewmen, and of what transpired in the deep, dark blue.

Headley’s letters also paint images of the almost fantastical technology they utilize to accomplish such a feat, not to mention the advancements of a certain underwater civilization thought to be a myth. All the technology used rivals any science fiction written at the time and surely holds much inspiration for the steampunk aesthetic of the modern era. Nothing so simple as a submarine could do the job, not for Sir Arthur Conan Doyle! In the little pod illustrated here, with special lights, an ingenious breathing apparatus, and resplendent furnishings our heroes make their way down. From inside this contraption they witness, and nearly fall prey too, some of the great and fearsome creatures of the sea.  And though the ship they are attached to is destroyed, the letters continue even after they are saved and taken in by the citizens of that lost city you may have heard of before…

“This narrative is not a special plea for that authenticity, but is simply a collection of facts the inferences from which may be accepted or rejected as the reader may think fit. I would warn the critic, however, not to be led away by the sophistry that because some professional trickster, apt at the game of deception, can produce a somewhat similar effect, therefore the originals were produced in the same way.”

― Arthur Conan Doyle, The Coming of the Fairies 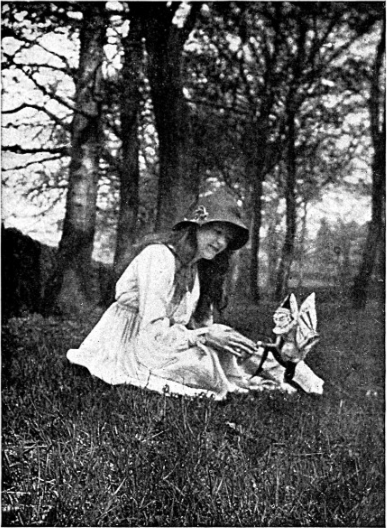 Certainly, the story of the Cottlingley Fairies is no work of fiction. In a trick for the ages, two young cousins published pictures in which they supposedly were visited by fairies and fairy folk. These young girls, Frances Griffiths (nine) and Elsie Wright (sixteen), took pictures to prove to their families that fairies little Frances was determined to find were in fact real. No one in their could really admit to truly believing in them, but they couldn’t find another explanation.

After producing many such prints, Elsie’s mother took some of them to the Theosophical Society in Bradford in 1919, and the society’s president Edward Gardner preceded to give a series of lectures on the photographs. Eventually word made its way to Conan Doyle who, along with several experts, looked over the photographs to determine their veracity before publishing them in The Strand in December of 1920 with an accompanying article. 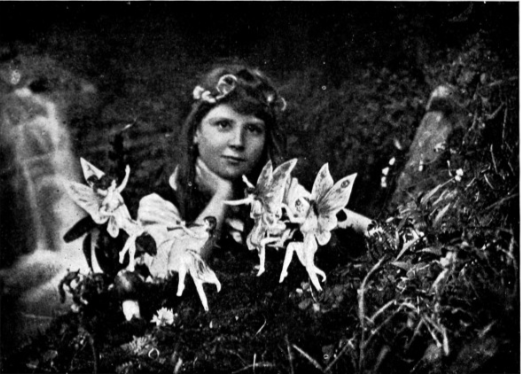 A. Frances and the Fairies

In the article, Conan Doyle wrote that: “The recognition of [the fairies] existence will jolt the material twentieth-century mind out of its heavy ruts in the mud, and will make it admit that there is a glamour and a mystery to life.” And what a glamorous life it would be to turn around and see sprites and gnomes and the like sitting on toadstools and playing in the morning dew!

In 1983 Elsie confirmed that the photographs were faked, and in retrospect readers saw Conan Doyle as a guillible spiritualist. They were so surprised the writer of Sherlock Holmes could believe something so fanciful. Dr. Burrows, Head of English and Creative Writing at the University of Huddersfield at the time, however addressed this. He remarked that the author’s article was “strategic.” In addition to this he said that, yes, he did think Conan Doyle believed the prints were real, but he did “not think [Conan Doyle] was that interested in fairies per se but he was enormously invested in the idea that there was more to the world than what we consider normal reality.”

And who can fault him really, for daring to imagine something beyond what we see with our everyday eyes? It was just that daring of mind that gave us one of the most iconic and influential characters in all of fiction.

Paired together here for the first time, these two works highlight the breadth of Conan Doyle’s imagination and interests, and they show― in their own ways― the openminded way he viewed the world and its boundless unknowns waiting to be discovered.

Listen to a sample on Skyboat Media’s SoundCloud! 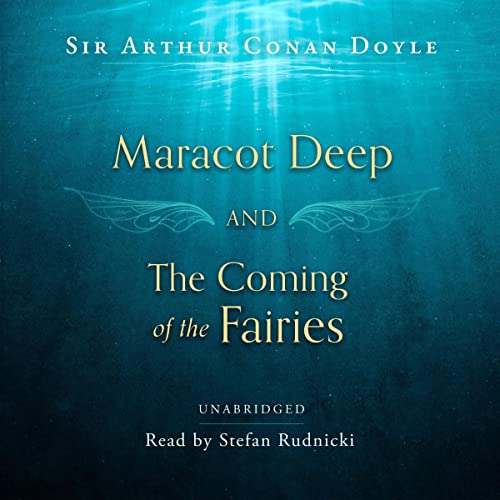 In this original pairing from Blackstone Publishing and Skyboat Media, two of Sir Arthur Conan Doyle’s lesser-known works, Maracot Deep and The Coming of the Fairies, are brought together for the first time. Doyle’s forays into science fiction and spiritualism prove just as engaging and imaginative as the mysteries for which he is best known.

Originally serialized in the Saturday Evening Post in 1927, Maracot Deep is a tale of discovery that voyages all the way down to the deepest part of the ocean. The eccentric Professor Maracot leads an expedition team consisting of Bill Scanlan, a gruff American mechanic; and Cyrus Headley, a young zoologist, to an area he hopes will come to be known as “The Maracot Deep”. On their way to the ocean floor, they are attacked by a monstrous creature from the deep sea but are rescued by none other than the citizens of the lost city of Atlantis. With wild and richly detailed descriptions of both the underwater majesty of their journey and the speculative science that helped get them there, this science fiction adventure tale is among Doyle’s most creative works.

In The Coming of the Fairies, Doyle tells the story of the real-life hoax of the Cottingley Fairies. In 1917, the Cottingley Fairies appeared in a series of five photographs taken by the young cousins Elsie Wright and Frances Griffiths, who presented them to the world as proof of the existence of fairies. A spiritualist, Sir Arthur Conan Doyle wrote The Coming of the Fairies for the 1920 Christmas edition of The Strand. Doyle himself was completely convinced of the authenticity of these photographs and used this work to lay out the evidence for his belief, though he did not write it to persuade anyone to his side, rather as “simply a collection of facts the inferences from which may be accepted or rejected as the reader may think fit”. Though Elsie later confessed and confirmed the photographs were a hoax, Frances maintained that the fifth photograph was in fact genuine.

The audiobook includes a bonus PDF containing reproductions of the famous Cottingley photographs featured in The Coming of the Fairies.

Get your copy today!