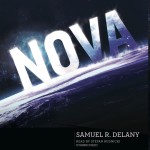 One of the most complete and fully realized pictures of an interstellar society that I have ever read.

Lorq von Ray understands how important and profitable Illyrion is.  As the most precious energy in the 31st century, it’s so profitable that he has no trouble putting together an illustrious crew, featuring a gypsy musician and a moon-obsessed scholar, to obtain seven tons of it. Even if he has to fly through the core of a recently imploded sun. However, what the crew doesn’t realize is that Lorq’s quest is about more than just money. It’s about all-consuming revenge.