Shirley Jackson’s THE LOTTERY, AND OTHER STORIES

“So how does one introduce these stories – when in fact they require no introduction? They are stunning, timeless – as relevant and terrifying now as when they were first published. Her work is an absolute must for anyone aspiring to write, anyone hoping to make sense of twentieth-century American culture. Shirley Jackson is a true master.” –author A.M. Homes, in her Introduction to The Lottery, And Other Stories

For THE LOTTERY, AND OTHER STORIES we turned to four award-winning narrators: Cassandra Campbell, Gabrielle de Cuir, Major Crimes star Kathe Mazur, and Stefan Rudnicki. Cassandra Campbell was chosen by the Shirley Jackson estate to voice the title story, The Lottery. She shares her thoughts about this honor, and this extraordinary story, in our Skyboat Studio:

“She was a master of complexity of mood, an ironic explorer of the dark, conflicting inner tyrannies of the mind and soul…she left the flourishes — or rather, directed them — to the reader’s imagination. –Eliot Fremont-Smith, book critic for The New York Times (as quoted from Jackson’s obituary)

Shirley Jackson (1916–1965), a celebrated writer of horror, wrote such classic novels as We Have Always Lived in the Castle and The Haunting of Hill House, as well as one of the most famous short stories in the English language, “The Lottery.” Her work has been adapted to film, television, and theater and has influenced such writers as Neil Gaiman, Stephen King, and Richard Matheson. In fact, her legacy is such that the Shirley Jackson Awards “have been established for outstanding achievement in the literature of psychological suspense, horror, and the dark fantastic.”

“With masterful performances, narrators Cassandra Campbell, Gabrielle de Cuir, Kathe Mazur, and Stefan Rudnicki bring to life the diverse characters and tales that make this collection so powerful and entrancing.” 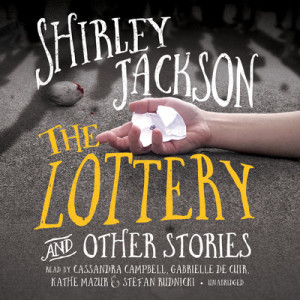 THE LOTTERY, AND OTHER STORIES

A powerful collection of short stories by Shirley Jackson

“The Lottery,” one of the most terrifying stories of the twentieth century, created a sensation when it was first published in the New Yorker. “Powerful and haunting,” and “nights of unrest” were typical reader responses. This collection, the only one to appear during Jackson’s lifetime, unites “The Lottery” with twenty-four equally unusual stories. Together they demonstrate her remarkable range—from the hilarious to the truly horrible—and power as a storyteller.

Now – we know it’s tempting – but don’t just skip to The Lottery and forget about those Other Stories! Trust us. As Shirley Jackson knows, it’s all about the build up, that slow kindling of excitement and gradual increasing of terror. So get out those headphones and go all in.

After You, My Dear Alphonse – Cassandra Campbell

Dorothy and My Grandmother and the Sailors – Gabrielle de Cuir

Come Dance with Me in Ireland – Gabrielle de Cuir

Got a Letter from Jimmy – Kathe Mazur

And THE LOTTERY, AND OTHER STORIES isn’t the only Shirley Jackson work we’ve had the honor of producing here at Skyboat. Gabrielle de Cuir voices one of Jackson’s young adult titles: THE WITCHCRAFT OF SALEM VILLAGE. Visit our spotlight blog post to learn more about this nonfiction take on the 1692 Salem Witch trials from the master of horror herself. Head on over to downpour.com for both today!