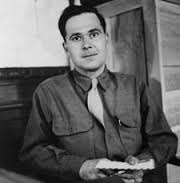 We are proud and honored to announce that this production has been selected as an Audie 2015 Finalist in the elite category of DISTINGUISHED ACHIEVEMENT IN PRODUCTION. We thank the judges for their vote of confidence and Audible.com for the fun of joining forces with them once again. Skyboat Media has been a Finalist in this category for three years running, and we appreciate the wind in our sails from the recognition. Thank you.

After WWII came to a close in 1945, a young GI named Harold Burson was transferred to Paris to serve at the American Forces Network, a station responsible for bringing U.S. style broadcasts to the millions of soldiers stationed in Europe.  Burson was an on the hour news writer, and after just a few months he was re-assigned once more, this time to Nuremberg, to cover the upcoming War Crimes Tribunal. He was twenty-four.

From November 1945 to March 1946, Burson spent each day in the courtroom, taking copious notes, landing important interviews, and at the sound of the last gavel he traveled back to his room to write the news commentary for that evening’s broadcast.  According to Burson himself—who, it should be mentioned, is still alive and kicking in his early nineties and running the world’s largest public relations agency—he “didn’t have either the right voice or the right accent to go on air,” and so he wrote the copy, while a succession of “voices” read his words over the airwaves each night.

For more than six decades, Burson saved these scripts, and it’s possible that they might have stayed in obscurity forever were it not for New York Times reporter Joe Nocera, who happened to learn of these scripts and Burson’s stint at Nuremberg during a social call.  Nocera wrote an article on the subject to commemorate the 65th anniversary of the end of the Nuremberg Trials, and perhaps unsurprisingly, the news caused quite a stir.

Fast-forward two more years, and the scripts end up on Skyboat’s doorstep.  We’ve been absolutely honored to spend the last few months producing an audiobook version of these scripts, complete with an introduction from Mr. Nocera and an exclusive interview with Mr. Burson himself.  The resulting work—narrated by Stefan Rudnicki, Scott Brick, John Rubinstein, Robert Forster, Richard McGonagle, Jim Meskimen, Kristoffer Tabori, Arthur Morey, and Christian Rummel, and due out from Audible in October of this year—is incredibly powerful and like nothing else we’ve heard.  Of course the historical context brings with it such import, but the actual writing is so wonderfully detailed, so alive, that it truly has what Mr. Nocera called a “you-are-there quality.”

After months of historical research, endless German pronunciation keys, and days spent recording several actors in various parts, we are delighted to report that we are now in the midst of putting together an audiobook trailer for the project, which involves pulling two minutes of audio footage from a file that runs several hours.  Yikes!  (But fun, too.)  We hope to have that for your listening pleasure soon, but in the meantime, feel free to feast your eyes on the first few pages of Burson’s original script or watch real footage of the Nuremberg Trials in the videos above.