JUNE: AN ODE TO AUDIOBOOK MONTH AND THE AUTHORS JUNE 2: THE AARNE-THOMPSON CLASSIFICATION REVUE

For Deep Blood Kettle written by Hugh Howey, AudioFile Golden Voice Stefan Rudnicki takes on the voice of a boy grappling with life, death, and learning to plow his father’s farm amidst an impending meteor that turns out to be much more than a natural disaster.

The child’s voice gives this story a tone equal parts innocence and gloom:  “They say the sky will fill with dust in a bad way if we don’t do something soon.  My teacher Mrs. Sandy says that if the meteor hits, it’ll put up enough dirt to block the sun, and everything will turn cold for a long, long while.”  But it also creates an effortlessness, a natural cadence that comes through loud and clear in Stefan’s telling.

Listen to the subtly heart-wrenching story below, and afterward, check out Lightspeed‘s Author Spotlight on Hugh Howey to learn how the fiscal cliff inspired this eerie tale of alien invasion.

Hugh Howey is the author of Wool, a self-published series of novelettes turned New York Times bestseller.  The book was optioned for film by Ridley Scott, and is now available in print from major publishers all over the world.  The story of Wool’s meteoric success has been reported in major media outlets such as Entertainment Weekly, Variety, the Washington Post, the Wall Street Journal, Deadline Hollywood, and elsewhere.  Howey lives in Jupiter, Florida with his wife and dog. 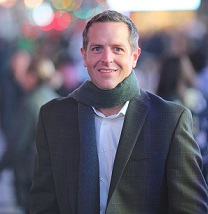