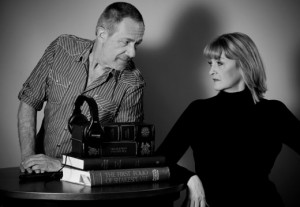 Skyboat is an independent production company.

But we have something in the works starting next week that is, well, revolutionary in nature.

Most people are barbequing this holiday, but Skyboat and Audible.com are cooking up something special just for you.

Even as I write this, we’re working with Audible.com, the author, and a cast of over 40 actors reading over 80 characters in over 100 scenes to create a full-radio style drama recording with Foley effects and a musical score that goes into production on July 9th.

We are working 24/7 on a project which will be of historic significance.  Our founding fathers would be proud.

That’d be too easy.

So, here are some clues …

1)   Based on a New York Times best-selling novel.

3)  A living author.  Who has written our new script.

If I say anything more, you’re going to get it right away.

Tweet your guesses to @skyboatmedia.  It won’t be a secret for long!