John Joseph Adams and Hugh Howey’s The Apocalypse Triptych: THE END HAS COME

We know it’s coming. You know it’s coming. Everyone knew it was coming. Finally, THE END HAS COME. Well, maybe not the end-end. But the audiobook, anyway. The third and final installment of THE APOCALYPSE TRIPTYCH has arrived, brought to you by Skyboat Media and distributed by Audible.

What happens after floods, pestilence, rising oceans, asteroids and warring humanity bring on the end of the world? It’s time to find out. 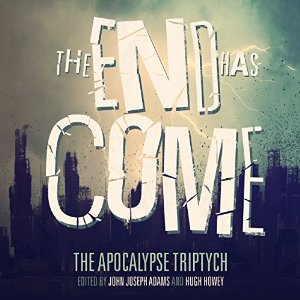 The audiobook features 22 brand new science fiction stories from the likes of Carrie Vaughn, Scott Sigler, Sarah Langan, Jonathan Maberry, and many others (see the amazing list of authors below). There’s something for everyone. A Deluxe Assortment box of apocalyptic delights. Genetically modified people, alien children, cyborgs, and flesh-eating mold. Yum.

If Hugh Howey was this excited to unbox the second volume, we can only imagine how thrilled he is going to be with the third volume. And that was just the book. Check out these narrators!

Is it the end of the world as we know it? Did only the “fittest” survive? Is the new world better than the old? Does “humanity” still exist?

Listen to THE END HAS COME and find out. Listen to it from beginning to, well, end. Never has the end been so entertaining.

As always, we bring you the full SkyCast list for your edification. Enjoy!

Like All Beautiful Places by Megan Arkenberg read by Roxanne Hernandez

Acts of Creation by Chris Avellone read by Emily Rankin

Carriers by Tananarive Due read by Roxanne Hernandez

The Uncertainty Machine by Jamie Ford read by Vikas Adam

Margin of Survival by Elizabeth Bear read by Justine Eyre

Jingo and the Hammerman by Jonathan Maberry read by Stefan Rudnicki

The Gray Sunrise by Jake Kerr read by Stefan Rudnicki

The Happiest Place… by Mira Grant read by Judy Young

In the Woods  by Hugh Howey read by Justine Eyre