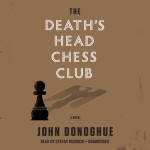 Building his story by switching back and forth between the 1940s and 1960s and providing an impressive amount of detail…about both chess and the workings of Auschwitz, Donoghue offers a compelling tale of expiation and forgiveness.

Debut author John Donoghue presents a suspenseful new novel about the improbable friendship between a Nazi officer and a Jewish chess player in Auschwitz.

SS Obersturmführer Paul Meissner arrives in Auschwitz from the Russian front wounded and fit only for administrative duty. His most pressing task is to improve camp morale, so he establishes a chess club and allows officers and enlisted men to gamble on the games. Soon Meissner learns that chess is also played among the prisoners, and there are rumors of an unbeatable Jew known as “the Watchmaker.” Meissner’s superiors begin to demand that he demonstrate German superiority by pitting this undefeated Jew against the best Nazi players. Meissner finds Emil Clément, the Watchmaker, and a curious relationship arises between them.

Twenty years later, the two meet again in Amsterdam. Meissner has become a bishop, and Emil is playing in an international chess tournament. As both men search for a modicum of peace, they recall a gripping tale of survival and trust.

A suspenseful meditation on understanding and guilt, John Donoghue’s The Death’s Head Chess Club is a bold debut and a rich portrait of a surprising friendship. –downpour.com

“Stefan Rudnicki’s voice is so deep that at times he sounds as if the turntable is running slightly slow, but this is not a drawback, believe me. He performs this deeply absorbing, tensely plotted novel with exquisite skill–never overplaying, never failing in attention–and his somber baritone has exactly the right gravity for the material….Pretty much un-turnoffable. B.G. Winner of AudioFile Earphones Award” — AudioFile Magazine Review