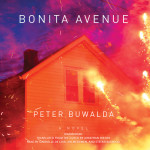 This award-winning debut novel is flat-out extraordinary. The rich layer of detail would be impressive if applied to one topic, but Buwalda creates multiple complex worlds around vastly different subjects…An outstanding literary suspense story that will appeal to a wide range of readers.

A Publishers Weekly Pick of the Week, January 2015

Siem Sigerius is a beloved, brilliant professor of mathematics with a promising future in politics. His family—including a loving wife, two gorgeous, intelligent stepdaughters, and a successful future son-in-law—and carefully appointed home in the bucolic countryside complete the portrait of a comfortable, morally upright household.

But there are elements of Siem’s past that threaten to upend the peace and stability that he has achieved, and when he stumbles upon a deception that’s painfully close to home, things begin to fall apart. A cataclysmic explosion in a fireworks factory, the advent of Internet pornography, and the reappearance of a discarded, dangerous son all play a terrible role in the spectacular fragmentation of the Sigerius clan.

A riveting portrait of a family in crisis and the ways that even the smallest twists of fate can forever change our lives, Bonita Avenue is an incendiary, unpredictable debut of relationships torn asunder by lies and minds destroyed by madness. –downpour.com