THE CITY ON THE EDGE OF FOREVER FULL CAST LIST THE SWARM: Volume One of the Second Formic War

Our favorite traveling Chihuahuas are at it again.

Bella and Harry take us all over the world with three more exciting new volumes in the award-winning adventure series. Learning about different cultures has never been so much fun! 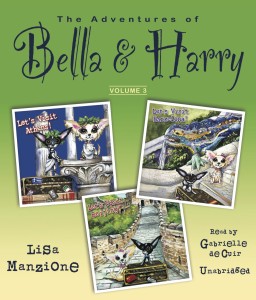 The journey begins in Athens, Greece, one of the oldest cities in the entire world. They visit famous landmarks like the Parthenon and the Palace of Knossos.  Harry learns a bit about Greek mythology and they make sure to try the local cuisine, of course. Opa! Opa!

Vámonos! Next, Bella and Harry are off to Barcelona, Spain. They take in the sights of Las Ramblas, visit buildings (and a dragon!) designed by Antoni Gaudi, and sample the local tapas.

Finally, it’s off to Beijing, China. Hide and seek anyone?  How about playing “hide and seek” on the Great Wall of China? Then, it’s off to The Summer Palace. Don’t forget about the food. Harry gets his first bite of “sweet ears.”  He feels much better after finding out they’re not real ears.  Zàijiàn to China for now.

Then, it’s back to Europe…

First stop: Edinburgh, Scotland. Dressing in the family plaid, Bella and Harry walk through the Royal Mile, visit Loch Ness in hopes of seeing Nessie the monster, and visit castles galore before stopping for a bite of Dundee cake.

Harry gets in touch with his inner gladiator when he and Bella visit the ancient city of Rome, Italy.  They visit the Colosseum, of course and Harry takes a swim in the famous Trevi fountain.  After enjoying some antipasto and spaghetti, it’s back up the Spanish steps to their hotel for a rest. Buona notte! Sweet dreams.

This European tour concludes with Berlin, Germany.  It’s through the Brandenburg Gate for Bella and Harry.  They have to make sure they have a snack first.  Bratwurst anyone? How about some Schnitzel Holstein? Yum. Now, they’re ready for the big day ahead of them. The Berlin Wall, Museum Island, and the Charlottenburg Palace. Oh my!

They hate to say auf wiedersehen , but we have much more to see. 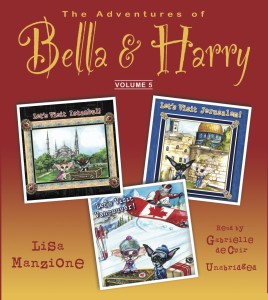 Our travels begin in the exotic city of Istanbul.  After a ferry ride on the Bosphorus River, they stop for a Turkish breakfast in Ortakoy, featuring some of Harry’s favorite foods. What foods aren’t Harry’s favorites? They visit the palaces of the sultans, gaze upon some of the great mosques of the world, and shop in the Grand Bazaar, where Harry hopes to find a magic flying carpet.

Next, it’s the holy city of Jerusalem for those lucky Chihuahuas.  Bella and Harry pack up their hats and are off to the Middle East. There, they take the cable car up to Masada, swim (actually, float) in the Dead Sea, and Harry learns about the “Old City” of Jerusalem.  A traditional Israeli dinner is a great way to end the visit. Shalom!

Next, it’s North America. Wow! Those puppies really get around.

Get those snowboards out because Bella and Harry are off to Vancouver, Canada.   Harry learns what an ecosystem is on the Treetops Adventure.  Then, it’s a lesson in  totem poles. And don’t forget the snack…pancakes with real maple syrup, of course. Hopefully, Bella and Harry didn’t forget their loonie or toonie so they can pay for that syrup!

That’s all for now.  Until next time, it’s good-bye from Bella-Boo and Harry too!

Get all of Bella and Harry’s adventures on downpour.com today!